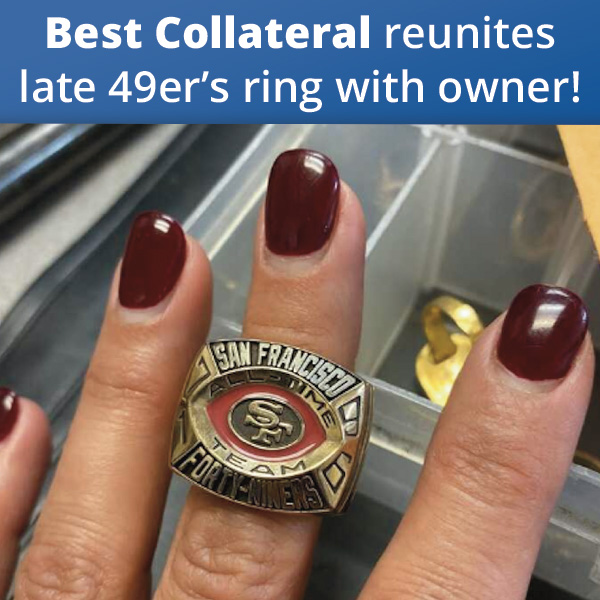 NOVATO, Calif. (KRON) – A thoughtful employee at a local North Bay pawn shop was able to reunite a 49er’s player ring to its rightful owner, the late Matt Hazeltine’s widow. The ring was reunited with Hazeltine’s wife when Best Collateral employee Aimee Neal posted the ring on the Nextdoor website.

Best Collateral is a pawn shop in Novato. Neal is the operations manager for the shop, she received the ring from a customer and had the option to melt the ring or resell it.

Neal saw former 49ers player Matt Hazeltine’s name engraved inside the ring. She knew the ring was precious memorabilia and decided that instead of considering these two options, she would reunite the ring to the family of the player.

Neal made a post to opens in a new windowMill Valley’s Nextdoor page and received a heartwarming response. The Nextdoor community helped her connect to Hazeltine’s wife, with the help of one individual who tracked her down himself.

Neal tells KRON4 that she comes from “a long line of 49er fans, just the aspect of being connected to a 49er is pretty cool.” This is why when the ring came across her desk, she recognized it as a piece of memorabilia. She searched up the player who’s name was inscribed in the ring on the internet, and was moved by Hazeltine’s story, who was from the same county as she was.

Once Neal got in contact with Hazeltine’s widow, Deborah Hazeltine, she was offered a price for the ring, which she declined. She told KRON4 she felt that the ring, “doesn’t belong in a jewelry showcase, it belongs with his family.”

KRON4 has reached out to Hazeltine’s wife but has not heard back, yet.